We Continue To Receive Rain And Have Many Areas With Impassible Roads. Please Help Us By Staying Off The Roads.

At 4:45 on March 17th Engine 11-6 was dispatched to check smoke coming from the neighbors yard on Raestone Street in the Fox Run Subdivision. Engine 11-6 arrived on scene within 6 minutes and found a single story residential structure on fire. The officer on Engine 11-6 notified dispatched and requested additional units.

After confirming the home owner was out of the residence the crew began extinguishing the fire from an external position until the additional units could arrive. Once additional units arrived crews entered the structure and were quickly able to extinguish the fire. The house sustained significant damage. No firefighter injuries were reported.

The cause of the fire is being investigated by the Montgomery County Fire Marshals Office. 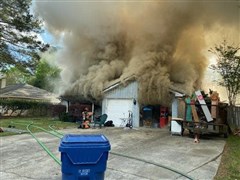 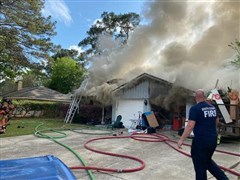